When it comes to the Michael Flynn case the media, along with vast swaths of the pliant public, are like a stupid dog that reflexively chases a shiny object or a phantom squirrel. The latest development is that the District of Columbia Court of Appeals ruled 2 to 1 to order crooked Judge Emmet Sullivan to accede to the Department of Justice request to drop the case against Flynn. While this ruling merits attention, the real news is that we now have documentary evidence that President Obama and Vice President Biden were involved directly and personally in orchestrating the entrapment and prosecution of Michael Flynn.

A Peter Strzok note, apparently penned on the 4 January 2017, recorded the discussion about Flynn with Barack Obama, Joe Biden, Sally Yates, Jimmy Comey, Susan Rice and Strzok (it looks like Comey took him along specifically as his note taker). Here it is: 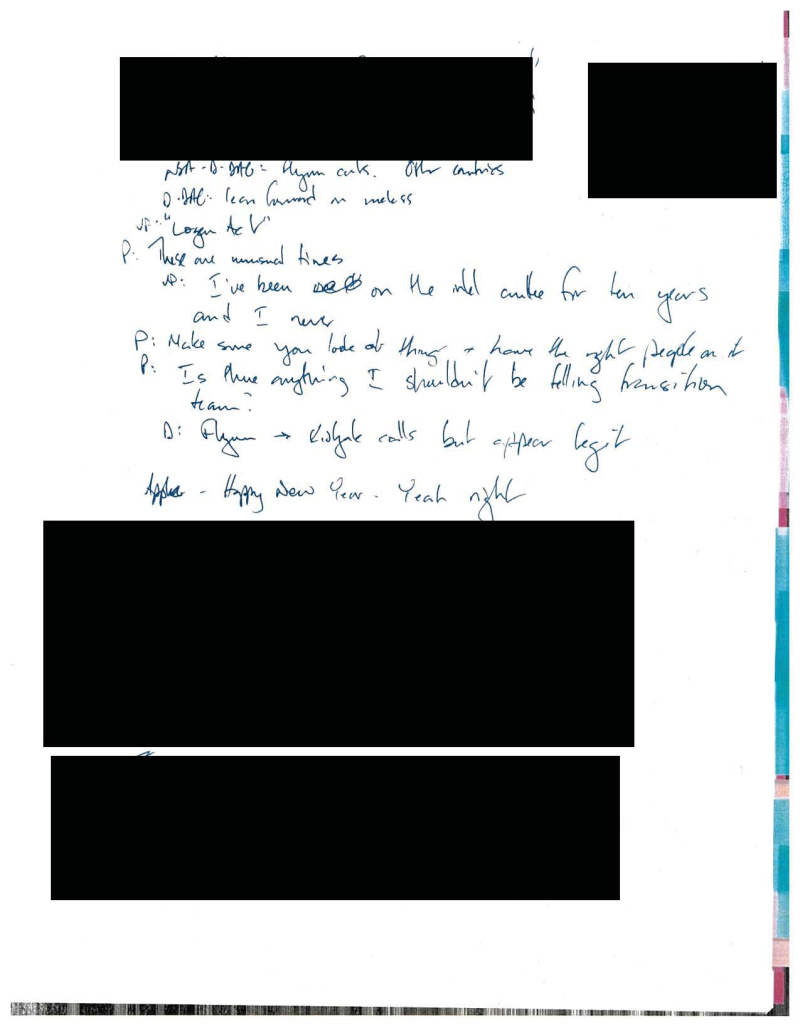 Strzok’s notes believed to be of January 4, 2017, reveal that former President Obama, James Comey, Sally Yates, Joe Biden, and apparently Susan Rice discussed the transcripts of Flynn’s calls and how to proceed against him. Mr. Obama himself directed that “the right people” investigate General Flynn. This caused former FBI Director Comey to acknowledge the obvious: General Flynn’s phone calls with Ambassador Kislyak “appear legit.” According to Strzok’s notes, it appears that Vice President Biden personally raised the idea of the Logan Act. That became an admitted pretext to investigate General Flynn.

So much for disparaging intelligent folk as "conspiracy theorists" for daring to declare that Obama and Biden played a direct and significant role in the plot to destroy the Trump Presidency before it was born. We have it in "black and white."

Take a close look at what Strzok recorded about what appears to be the substance of the 5 January 2017 meeting at the White House:

P (Obama): “These are unusual times”

P (Obama): “Make sure you look at thing and have the right people on it.”

P (Obama): “Is there anything I shouldn’t be telling the transition team?”

Comey’s answer to Obama’s questions about what to withhold from the transition team. Comey clearly stated, according to Strzok, that the Obama team should say nothing about the Flynn Kislyak call. However, Comey also acknowledge the calls “appear legit.”

This is one more piece of damning evidence that Obama, Biden, Comey and others in that meeting were engaged in what is a clear conspiracy. Is it criminal?