Thanks to Judicial Watch, a new batch of emails have surfaced that put the FBI in a whole lot of trouble with at least two Federal Judges. Attorney Ty Clevenger made repeated FOIA requests to the FBI for all emails and communications dealing with Seth Rich and his murder. The FBI denied they had any such communications. Whoops! There are now five emails and one text message that show that denial is not true. Let's dig into the details.

The FBI, in the person of David Hardy, affirmed in an affidavit that there were no responsive records. Hardy is the Section Chief of the Record/Information Dissemination Section ("RIDS"), Information Management Division ("IMD"),1 Federal Bureau of Investigation ("FBI"), in Winchester, Virginia. Here are the relevant portions of his first affidavit:

On September 30, 2017, by electronic submission via the OIP online portal, Plaintiff submitted an administrative appeal of the FBI's September 19, 2017 determination. Specifically, Plaintiff alleged the FBI limited its search to the Central Records System("CRS") for main file records. Additionally, Plaintiff noted that any responsive records likely would be found in emails, hard copy documents, and other files in the FBI's Washington Field Office; therefore, the FBI should be directed to conduct a thorough search, to include emails and other records in the Washington Field Office. . . .

(9) By letter executed on November 9, 2017, OIP advised Plaintiff it affirmed the FBI's determination. OIP further advised Plaintiff that to the extent his request sought access to records that would either confirm or deny an individual's placement on any government watch list, the FBI properly refused to confirm or deny the existence of any such records because their existence is protected from disclosure pursuant to 5 U.S.C. § 552(b)(7)(E). . . .

(20) Subsequently, the FBI conducted additional searches of the CRS via the UNI application of ACS and a Sentinel index search for both main and reference file records. The FBI used the same search terms it used in its original searches as described supra. This new search also resulted in no main or reference file records being located responsive to Plaintiff's FOIA request. . . .

(25) The FBI conducted an adequate and reasonable search for records responsive to Plaintiffs FOIA request; however, no records were located. First given its comprehensive nature and scope, the CRS is the principle records system searched by RIDS, to locate information responsive to most FOIA/Privacy Act requests, as the CRS is where the FBI indexes information about individuals, organizations, and events for future retrieval. See , 14, supra. Second, the CRS is the FBI recordkeeping system where investigative records responsive to this request would reasonably be found. Given Plaintiffs request sought information about an individual subject, Seth Conrad Rich, who was murdered in the District of Columbia on or about July 10, 2016, such information would reasonably be expected to be located in the CRS via the index search methodology. Finally, the office likely to conduct or assist in such an investigation — WFO — confirmed that it did not open an investigation or provide investigative or technical assistance into the murder of Seth Conrad Rich, as the matter was under investigation by the MPD, who declined the FBI's assistance.

Pursuant to 28 U.S.C. § 1746, I declare under penalty of perjury that the foregoing is true and correct, and that ibits A – E attached hereto are true and correct copies.

Well, guess what? Just as Ty Clevenger anticipated, the relevant emails were in the Washington Field Office. To make matters worse, some of these emails were sent to FBI Headquarters. David Hardy either is incompetent or he has lied. There is no middle ground. In either case, his submission was not true.

Here are the emails (I transcribed them and put them in chronological order to facilitate your ability to read them and understand what is being communicated).

I hope you are well. I heard from the front office that you are covering for BLANK this week. Various news outlets are reporting today that Julian Assange suggested during an overseas interview that DNC Staffer, Seth Rich, was a Wikileaks source and may have been killed because he leaked the DNC e-mails to his organization, and that Wikileaks is offering $20,000 for information regarding the death of Seth Rich last month. Based on this news, we anticipate additional press coverage on this matter. I hear that you are in a class today; however, when you have a moment can you give me a call to discuss what involvement the FBI has in the investigation.

Adding BLANK (a name to the addressee list). I am aware of this reporting from earlier this week, but not any involvement in any related case. BLANKED OUT.

Adding BLANK for real. Stupid Samsung. (Apparently the author of this message failed in the preceding message.)

Hi. (THE REST OF THE MESSAGE IS BLANKED OUT.)

Thanks BLANK will do.

7:09 pm — Message from FBI Washington Field Office to Jonathan Moffat and Peter Strzok of the FBI's Criminal Division and two other BLANKED out addressees.

FYSA (For Your Situational Awareness). I squashed this with BLANK

The initial response to the query from the Public Affairs Office of the Washington Field Office is telling. The Agent could have responded very simply–The FBI was not involved in any facet of the Seth Rich investigation. This was a local matter handled by the DC Police.

But that is not how the Agent responded. And then he took the step of adding in people at FBI Headquarters. How do we know this? The message from the Washington Field Office at 7:09 pm was sent to the Criminal Division to Agents Moffat and Strzok.

Ty Clevenger now has ample ammunition to return to court and insist that the FBI be required to identify all agents involved in these email chains and to discuss what they knew about the Seth Rich case. David Hardy declared under the penalty of perjury that there were no such emails. I doubt that the two judges involved in the relevant cases on this matter will be happy to learn that the FBI stonewalled a valid FOIA request and a

Below is the copy of the email chain. You need to read from bottom to top. 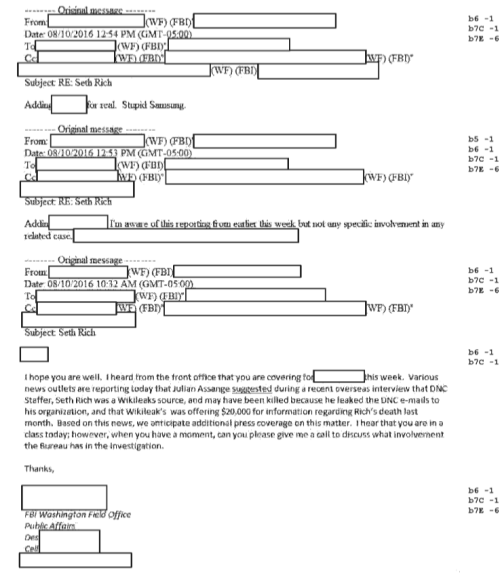